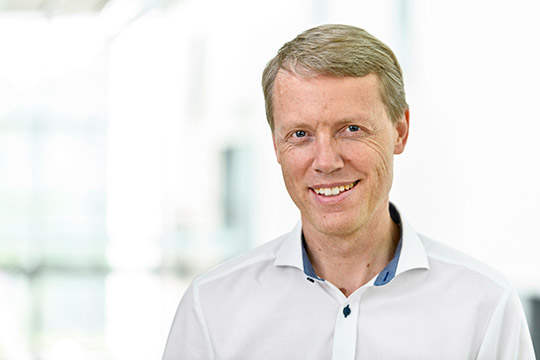 Our research primarily focuses on the differentiation between "self" and "non-self", with an emphasis on the recognition of foreign nucleic acids by the receptors of the innate immune system. Nucleic acids that originate from pathogens fall into this category, but also those nucleic acids that come from damaged or cancerous cells. The most prominent members of the group of nucleic-acid sensors are: RIG-I, TLR3/7/8 and 9, MDA5, and cGAS/STING.

RIG-I (retinoic acid-inducible gene I) is a pattern recognition receptor (PRR) that recognizes viral RNA and triggers a signaling cascade that leads to the induction of an antiviral state of the cell including the production of type I IFN. Our lab has discovered that the ligand recognized by RIG-I is a blunt-ended, short double-stranded RNA molecule of at least 20 nucleotides with a 5’-triphosphate group at the end (3p-RNA). This ligand has been shown to be highly effective in preclinical studies of immunotherapy against cancer and protection against viral infections. One of the RIG-I ligands developed at our institute is currently being tested in an international clinical multicenter-phase II study on the immunotherapy of tumors. In addition, we are continuing to preclinically develop 3p-RNA ligands as a therapy for cancer, by using combinations with checkpoint inhibitors, chemotherapeutic drugs, or radiation.

One focus of our working group is innate immunity, which is why we are working on the synthesis of new RIG-I ligands. For this, we use chemically-modified nucleic acids, which we produce in our own nucleic-acid synthesis laboratory using state-of-the-art instruments and techniques. To this end, we are investigating how the stability of the RIG-I ligand can be increased and whether a certain spatial arrangement of several minimal ligands can lead to increased RIG-I stimulation.

Ligands of toll-like receptors (TLRs) consist of a broad spectrum of “foreign” structures that only occur in or on microorganisms. For example, TLR3, TLR7, TLR8 and TLR9 are responsible for the immune recognition of pathogenic nucleic acids. Our current research focuses on viral RNA recognition by TLR7 and TLR8. With our ever-increasing knowledge of the functional consequences of TLR7 and TLR8 activation, we are now increasingly interested in the development of specific- and therapeutically-applicable TLR7 and TLR8 ligands.

Another focus of the research in our lab has been on the key sensor for cytosolic double-stranded DNA, cyclic GMP-AMP synthase (cGAS), which subsequently generates 2’-3’-cGAMP to trigger STING and elicits the production of type-I interferon to elicit an immune response. Together with the group of Martin Schlee from our institute, we were able to show that Y-shaped, structured, single-stranded DNA, which occurs in the cDNA of certain retroviruses, can also serve as a ligand for cGAS.

Our goal is to use the basic research already discovered in the field of nucleic acid immunity to further develop the clinical implications of these discoveries.

The activation of innate immune receptors can be an effective option for cancer therapy, whereby local anti-tumor cytokines (such as interferon) can be induced through the help of chemokine-specific effector T cells and NK cells recruited to the tumor. The RNA receptor RIG-I is an especially attractive target for this therapy because, unlike other innate immune receptors, it is expressed on nearly all nucleus-containing cells of the body and in tumor cells can specifically activate the programmed cell-death pathway. We have a long-standing interest in the anti-tumoral possibilities of activating RIG-I and through the founding of Rigontec GmbH were able to proceed with RIG-I ligands discovered in the university laboratories through to clinical trials in humans.

Checkpoint inhibitors (CPIs) have been a major breakthrough for oncologists in the past few years. They work by turning off certain "immune checkpoints", thus accelerating the immune response. They are particularly effective in so-called "hot" tumors, that is, those in which there is already an immune reaction against the tumor but not enough to destroy it. They are less effective against "cold" tumors, where there is little or no immune response present. Therefore, activating the innate immune system to turn "cold" tumors into "hot" ones could also make them susceptible to CPIs. We are now looking into such combination therapies to allow the classical CPIs to be effective against a greater number of tumors.

Tumors have developed a myriad of mechanisms to protect themselves from destruction by the immune system. One particularly unexpected reaction that we found, was that melanoma cells actually lose their differentiation upon exposure to inflammatory molecules and thereby escape recognition by tumor-specific T cells. We would like to better understand such resistance mechanisms and will investigate how tumors are able to escape activation of the innate immune system. This will serve as a basis for inhibiting resistance in tumors to current therapies.

The development of new immune adjuvants and vaccination strategies is of central importance for the successful treatment of life-threatening infections and tumor diseases. The targeted activation of the innate immune system by activating endosomal TLRs represents a very attractive therapeutic option.

In recent years, our group has been able to identify highly specific and very efficient ligands for a number of these receptors, especially for TLR7 and TLR8. Since the activation of the two receptors has different effects on the type of immune response induced, these ligands allow the modulation of the immune system in different and specific ways.

In cooperation with other national and international laboratories, the most promising ligands are currently being tested as vaccine adjuvants in different animal models, namely ferrets (influenza), woodchucks (hepatitis B), and humanized mice (HIV). The aim of this translational immunology project is to hopefully transfer our basic research into successful clinical applications.

In Situ Autovaccination Against Papillomavirus for the Prevention Of Skin Cancer

Human papillomaviruses (HPV) are small, non-enveloped dsDNA viruses with a ∼8000 bp circular genome. Currently, more than 200 HPV types have been identified, which are divided into the subgroups: alpha, beta, gamma, mu, and nu. In early childhood, the skin of most people are infected with various betaHPV subtypes, as the viruses are part of the normal microbiological flora of the skin. In immunocompetent individuals, persistent HPV infections of the skin are well controlled and are mostly asymptomatic. However, infections can become problematic in immunocompromised patients. Immunosuppression leads to higher betaHPV levels on the skin and to a significantly increased risk of skin cancer. In contrast to the genital forms of HPV (e.g. HPV16/18 associated with cervical cancer), there is no established vaccine available for betaHPV, in particular due to the multiple subtypes.

We are investigating whether therapeutic activation of PRRs by specific ligands in combination with a replicating virus can restore physiological activation of the immune system in immunocompromised patients. This would lead to a sort-of endogenous vaccination and consequently to the eradication of the virus or the reduction of the viral load without the need to know the exact persisting betaHPV subtype. We believe this could reduce the development of skin cancer in immunocompromised patients.

Healthy as well as pathologically altered cells release extracellular vesicles (EVs), which contain a large number of messenger molecules, such as proteins, nucleic acids, and lipids. These molecules not only influence the tissue directly where they are released, but also have systemic effects and facilitate intercellular communication. The specific composition of EVs present is dependent on the exact biological state of the surrounding cells, which is both cell-type and context dependent. The EVs of pathologically-altered cells are therefore different from the EVs of healthy cells. Because of this property, extracellular vesicles are also of interest as biomarkers for clinical diagnosis.

One current focus of our lab is the establishment of EV-based diagnostics for determining treatment response in glioblastoma (GBM). Predicting what response patients will have to therapy and reliably assessing the recurrence of tumors remains a major challenge in GBM. Precise monitoring of the success of therapy is currently not possible. Therefore, there is an urgent medical need for further diagnostic, prognostic, and predictive markers of GBM.

In addition, we are investigating the influence of various stress factors (e.g. chemotherapy or viral infections) on the phenotype of the EVs that are released. We are particularly interested in histones and the alarmin HMGB1, the serum levels of which seem to have diagnostic value in tumor diseases. HMGB1- or histone-bound nucleic acids are putative biomarkers that could be used for tumor detection through the analysis of their mutations.

We aim to isolate extracellular vesicles from serum samples and evaluate their usefulness as biomarkers for tumor diseases. For this purpose, we will characterize the surface-marker expression and nucleic-acid content of large vesicles (50–150 nm in diameter) in order to identify a tumor-specific “EV profile”. Such a profile would allow a distinction to be made between tumor-specific and healthy EVs and, by means of EV monitoring, show trends in the course of the disease or treatment response. Since EVs can easily be obtained from blood serum, they can be used as a so-called "liquid biopsy" for regular diagnostic controls.